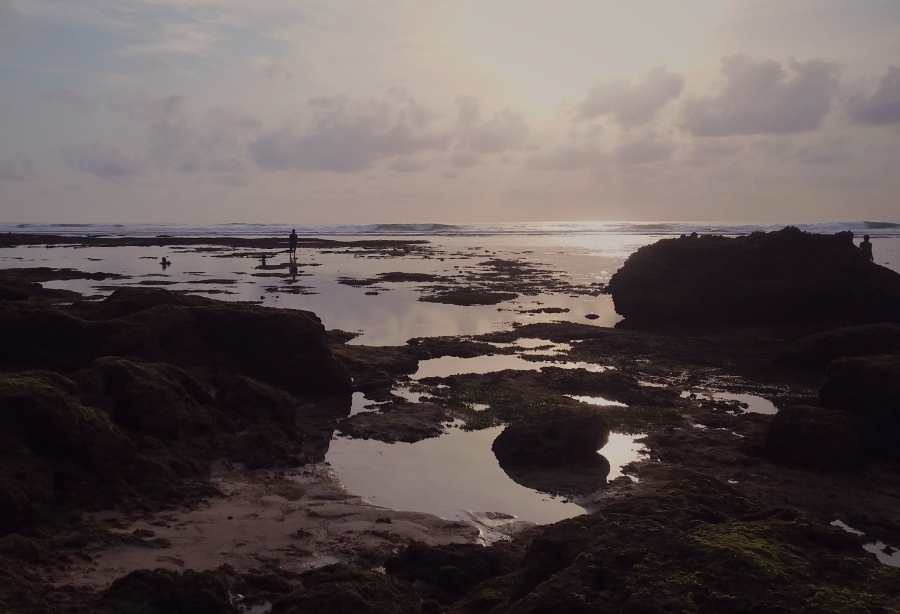 My Easter trip to Bali mostly consisted of sitting by the pool and on the beach in the north of the island while alternating between studying and revising. I knew even as I was booking that I would have little time for anything else. However, rock fever had taken hold of me and I needed a change of scenery from the cityscape of Singapore that a hike along the Southern Ridges wouldn’t satisfy. Fortunately, on my last whole day I arrived back in Denpasar early enough to make the short trip to Uluwatu beach.

This idyllic tourist trap of a beach runs straight onto a reef, creating paddling pools for all in addition to fabulous waves that the surfer in me wishes I was brave enough to surf. Descending into the initial amalgamation of beach and cave, I was a tad sceptical but as I emerged into the sunlight, the reef stretching before me, the view blew away the final cobwebs that the routine of Singapore had weaved in my mind.

Keen to stretch my legs and get away from the biggest throng of tourists, I meandered along the reef to the end of the beach, enjoying the sun and waves. I normally find the waters of South East Asia leave a slight residue of grime and pollution on my hair and skin, at fact that means the beaches here hold little appeal for me. Uluwatu beach was a rare exception to this, although I did not go out any further than the tidal pools. With sunset still a little way away, I headed back up the cliffs to a café perched precariously above the rocks below and devoured some delicious fried rice, looking out over the ocean and, eventually, the sunset.

Uluwatu beach and Bali in general was a wonderful balm to my soul. The only downside was the taxi service of Uluwatu who possess a monopoly of the area, not allowing other companies, including Uber and Grab, to operate out of the area and so charging a premium which was twice what I paid to reach the beach. The only exception to this being the hotel cars who naturally match the taxis in price. The taxi service wouldn’t allow me to ride with a lovely couple who suggested I share the cost of their private driver from Denpasar with them, after I found out just how much they wanted to charge. With the driver unable leave with me in the car, I was forced to get out and walk until I was able to arrange a covert pick up further down the road with the asistance of an extremely kind chap at a cafe.

Operation Extract Tourist went off without a hitch. A short motorbike ride further up the road to a darkened layby. A black car pulling in smoothly (after a slightly awkward U-turn). The door being opened for me. Tinted windows concealing me from prying eyes and we were off. Total time: three minutes and twenty two seconds. Next stop: the airport for a night on the floor. The kindness of the people who had helped me overshadowing the blatant extortion and monopoly of the taxi drivers.