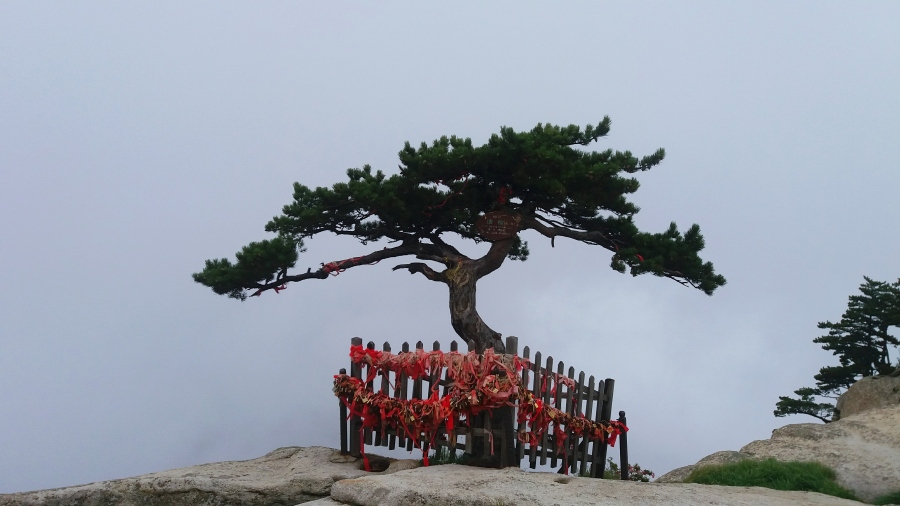 I seem to have a slightly masochistic streak in that, despite a deep seated fear of heights, I love finding sheer precipices to visit. Perhaps it is an addiction to the adrenaline that sees me seeking new heights (literally), or maybe my fear of missing out is greater than my fear of heights (unlikely). However, I suspect the true reason is my Guernsey donkey stubbornness in the belief that enough self inflicted exposure therapy will eventually overcome a fear that is only exceeded by my fear and hatred of wasps.

Enough rambling prelude, let’s start painting a picture of what has got me chattering on about heights and my fear of them. Imagine a mountain which has a (somewhat misplaced) reputation as being the most dangerous hike in the world. Bloggers love to repeat the old wives tale of 100 deaths a year on these precarious slopes and no post is complete without a photo of the notorious plank walk: a plank of wood bolted to a sheer cliff with a 5000 foot drop should one slip.

When first researching China, I stumbled across photos of the plank walk and just knew that I had to try it. It was 90% of my reason for visiting Xi’an, the other 10% being generously allowed for the Terracotta army. Imagine my disappointment (and I’m not too proud to admit, miniscule spark of relief) when I arrived at the entrance of the plank walk to find it padlocked closed.

Admittedly I had known from the start that there was a reasonable chance of the plankwalk being closed. Of the three days I had pencilled in for a day trip to Huashan Mountain, I had picked the one with the least bad weather but conditions were still far from good. When I had set out from Xi’an that morning, it had been in a fine drizzle which accompanied me halfway up the initial six kilometre climb from the Jade Temple. That climb in itself had been rather nervewracking. The first three kilometres had been a deceptively pleasant upwards gradient followed by some slightly tougher stairs over the next kilometre. The two penultimate kilometres before the north peak were continuous steps of evil which saw me using my hands on the steps in front of me for various stretches or clutching firmly to the chain hand rails.

At this point my Guernsey donkey stubbornness once again reared its equine head. I had read that the walking time for the “One Way up Huashan Mountain from Ancient Times” path took between two to five hours with an average time of three and a half. Hence I had decided that I would do it in under two and a half hours. Nevermind that I would never classify myself as particularly fit, there is something about being given a walking time that makes me strangely defiant and determined to be quicker. This meant that I took no respites on my upwards sprint beyond a few five second breathers on the longer stairways. Given the heavy cloud cover, I had no fear of missing out on the any views and was able to devote myself fully to the hike.

I made it panting and sweating to the top of the North peak in two hours and fifteen minutes without falling down any of the ladders masquerading as stairs, so a definite win on that front. There were two precarious feeling climbs that I wanted to complete on the mountain. The aforementioned plank walk and the climb down to the chess pavilion. This latter was on the eastern peak and it was to here that I headed first.

Sadly for me, the northern peak upon which I was standing was the lowest of the peaks and instead of getting a break from all the up I had been doing, I found myself immediately having to climb up yet more stairs. Mercifully these weren’t nearly as steep as the more terrifying stretches of the One Way path. There was a ridge I crossed which was fine as I was crossing it but when I looked back, the clouds to each side had momentarily cleared revealing the sheer drop to either side of the path.

Walking through the clouds was very enjoyable with the tantalising glimpses of mountain tops they occasionally revealed. In amongst the peaks there were far less sheer drops to set my heart beating above what could be excused as a severe case of excessive stairs. This of course changed as I reached the queue to climb down to the chess pavilion. Even after being given my harness I had a long wait to consider just what I was about to do. Only a certain number of people could climb down at a time and it was clear that the operators were letting that number down each time rather than opting for smaller, more efficient groups.

Even though the group before me had all descended when I arrived, it was a forty minute wait before they all returned and we could begin climbing down. This left plenty of time for the clouds to clear for a few scant seconds at a time. Each time I became a little more nervous as I saw the distance to the pavilion. My nerves were not improved as, when it was finally time to start climbing, two of the girls ahead of me quickly backed out and retreated back up the steps.

Once I got started, the initial climb down, the only stretch deemed risky enough to need a harness, wasn’t so bad although my knees shook a little from the pent up nervous energy. The remainder of the walk out to the pavilion was quite pleasant and I took great amusement from a couple of bits that didn’t have a wire to clip one’s harness to but still had a sheer drop patiently biding its time to capture the unwary at the bottom. I guess one must laugh or cry in that situation. Heading back to the top was very frustrating as I had been near the front of the queue going down so had to wait for everyone else to finish climbing down – another half hour wait.

When I finally made it back to the top, safely away from all sheer drops into cloudy oblivion, I walked as quickly as my exhausted legs would allow to the south peak and the infamous plank walk. Each step saw a coil tension winding tighter in the pit of my stomach. My nerves were a delicious crescendo as I walked along the first, safely railed section of the walk. As I realised the walk was closed, the locked gate looming before me, my turbulent emotions deflated like a balloon into a hard little ball of disappointment. Admittedly there was a pin prick of relief that softened the sharpest corners but I enjoy pushing my limits too much for that relief to be overarching.

With nothing left to see on the mountain – I saw no benefit in climbing to the very top of each peak with so much cloud concealing the view. I made my way to the western cable car. While the drizzling fog made climbing to the peaks an exercise in futility and was most likely the cause of my disappointment over the plank walk, it did create some eerily beautiful backdrops, especially where the ubiquitous padlocks were joined with rippling red prayer ribbons on their fences and railings.

The western cable car was ridiculously overpriced, 126 yuan (£14.39) plus 40 yuan (£4.57) for the compulsory bus (unless one wants to pay even more for a taxi, since walking along the road is forbidden) back to the tourist centre. In Europe this may seem reasonable but considering that my student entrance fee to the park was only 80 yuan and that the 120km bus journey back to Xi’an was also only 40 yuan, the cost did rankle somewhat. In hindsight I should have walked around to the northern cable car which is cheaper and from the bottom of which one can walk back to the tourist centre. However, the weather seemed to be closing in even more and all the mini cafes were closing even though it was only just after five so I was worried that the northern cable car would be closed by the time I reached it.

If I let go of my irritation over the cost, the cable ride down was a lot of fun. I had the whole car to myself and there was a breathtaking moment when I emerged from the base of one cloud layer and could see all the mountains poking their heads from the layer below. Even sitting suspended in a box, surrounded in all directions by a white void was a surreal experience, making me feel like I had entered the nothingness.

From the tourist centre, I circumnavigated the cries of taxi taxi and caught the bus back to Xi’an in time to devour a late dinner of a lamb Chinese burger and some excellent 1 yuan beef skewers. The only difficulty was that sitting still on the bus allowed my muscles to seize somewhat and my walk back to the hostel was more of a very slow penguin waddle.

A final note I would like to make for anyone who travels from Xi’an by train to Huashan Bei station is that the taxi drivers will pounce on you as you leave the station and tell you that the free shuttle bus to the tourist centre is closed. No matter how many times you tell them no they will keep following you trying to get you to get a taxi. Ignore them. Walk across the square, passed the statues of musicians, to the carpark. There is a small bus stop. Wait there for the bus and continue to ignore the taxi drivers. Ideally get the number one shuttle bus as it is quicker than the number two. Some websites imply the shuttle doesn’t run outside of peak season but given the level of continuous misinformation, I shall leave it up to the reader to decide if they want to try waiting for the shuttle in the winter months.