I struggle to keep my eyes open as I slouch in the waiting area. While it isn’t so late as to be early, days of travelling and rising early have convinced my circadian rhythm that anything much beyond 10 o’clock is unacceptable so that as we begin to board at 11:40, I am hard pressed not to full asleep standing up. This did have its advantages because, as we finally crept from the station, I was able to quickly fall asleep and not get jerked awake by the train.

My first day on the train passed quietly and I was finally able to finish my book. This was both good and bad because on the one hand plot progression and story arc conclusion but on the other hand I now have to wait for the next book to come out, which will undoubtedly be in a few years time. Since then I have been working my way through the first few books of Terry Pratchett’s Discworld series which, while different from the writing styles to which I normally isolate myself, has so far proved itself to be an enjoyable read. The only real disturbances to this blissful peace and quiet was the videos the small boy opposite me was watching and a very odd Chinese lady who was almost continuously leaning across me to charge or check her phone.

The second day trickled through the sand timer of life in much the same way as the first. I was awoken at six thirty and then again at seven by the Chinese lady kneeling on the edge of my bed and leaning over me to plug her 77% charged phone in and later check on it. I also had a small audience eating my lunch as everyone wanted to know what the mayo was and we spent five minutes trying to explain it to the Chinese woman. After that, the young lass in the bunk above mine seemed to pick up the courage (with some encouragement from Mum) to practice her English with me and I spent a large slice of the afternoon trying to remember what sort of vocabulary secondary school languages teach and asking relevant questions such as “what is your favourite subject” and “do you have any hobbies”. This was pretty fun and with Google Translate murdering our respective languages, we just about manage to cover any vocabulary holes.

The third and final day of this leg crawled by as it always does when one is anxious about not missing their stop. A large contributor to this was also that the clock kept going back an hour until we eventually reached Moscow time, three extra hours in total. As well as chatting to a few of my fellow passengers, I had a portrait drawn by a gentleman at one end of the carriage. Considering I struggled to write smoothly on the train, I was most pleased with the finished piece. Although, baring in mind I barely recognise myself these days, especially without glasses, I have no idea if it actually looks like me.

Arriving in Kazan, I bit the bullet and agreed to the ridiculously overpriced taxi, deciding one and a half hours walking was too far even for me. I suspect the extortionate rate was further compounded by leftover football fever from the World Cup since Kazan did host one of the stadiums.

Several days in Irkutsk saw me doing embarrassingly little. With the end of travels looming on the horizon and the exitement of horse riding in Mongolia over, I was not feeling in the most adventurous of moods. The fact that I had an extremely good book that stole away hours of my time the moment I ventured into its digital pages was an additional diversion. 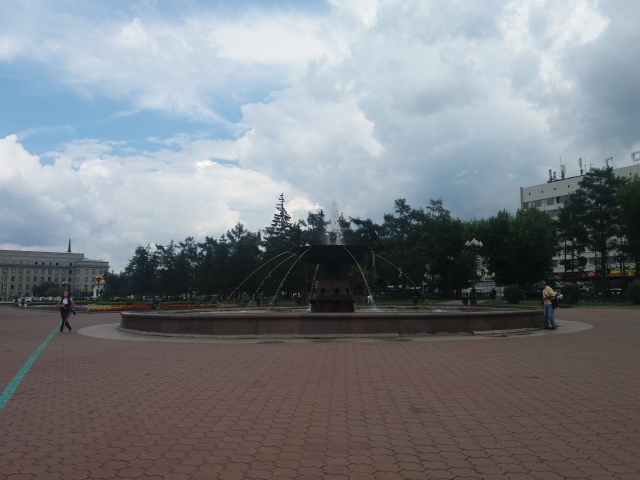 After a good night’s sleep-my hostel had delightfully comfortable beds-I set out into the city, following the tourist walking route. The hostel desk had a stack of city maps with the route printed on them but when I reached a road on the route, I discovered a green line had been painted to mark the route. Hence I was easily able to wander the city and see each of the 30 sights the line snaked passed, reading the plaques that marked them. Had I been in more of a sightseeing mood I may have also entered some of the museums or churches but as it was, I was content with stretching my legs and seeing a little of the city. The plaques were a tad dry, being of the factual nature but I still enjoyed reading them and discovering the history of Irkutsk, it was interesting to see just how many of them had been damaged in a huge fire that took place in 1879. 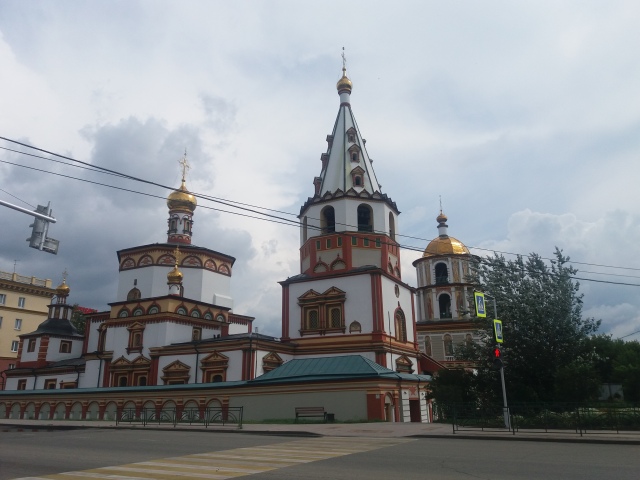 At this point I would like to insert an aside to extol the virtues of having a walking route fully marked out on the road in addition to the more traditional “here is a map with a line drawn on it” method or the occasional “signposted when we remember” approach. For starters, tourist maps are notoriously terrible as they have an unfortunate tendency to forget the existence of many roads. Furthermore, they cannot be used if there is even the slightest hint of rain and in both the case of map and signpost, one inevitably ends up feeling lost due to a lack of suitable signage giving directions or road names. On a personal level, I enjoyed the opportunity to walk without having to stop and consult my map every minutes. All in all I think more places should adopt this sightseeing approach though perhaps they could include amusing anecdotes and local lore in addition to who built what and when.

Accompanied the next day by looming clouds and a steady rain, I caught the bus to Listvyanka on the shore of Lake Baikal. For a drive that takes between one and two hours I was happy to discover it cost a mere £1.60 each way. Before I eventually gave up at peering through the continuously steamy windows-somewhere between here and Singapore, condensaton switched back to forming on the inside of windows-I was surprise by how quickly the city ended and we returned to the countryside. 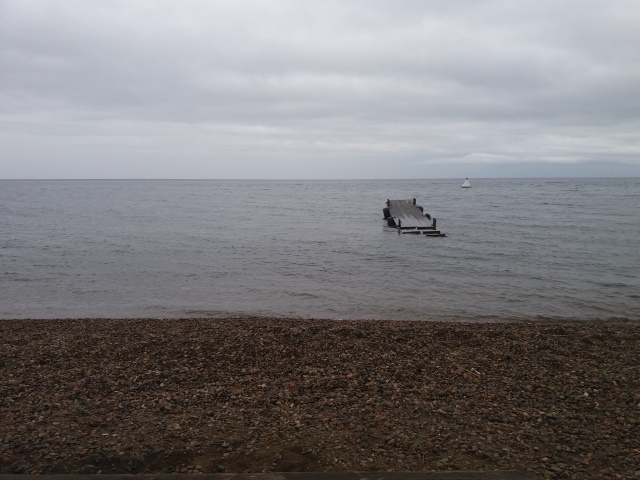 Lake Baikal is the largest lake in the world, containing some fifth of the world’s fresh water, and it certainly gave that impression as I stood on the shore and strained to see the other side. With the low cloud cover, this was not initially impossible but after I had warmed up with some borscht and coffee in a quaintly maritime themed cafe, the clouds had cleared enough for me to make out the faint smudge of land. This was only possible because Lake Baikal’s true size lies in its length of 636 kilometres while its maximum width is only 79 kilometres. Due to my short stay in Irkutsk, I had decided not to visit the more scenic section of the lake around Olkhon Island because of the time constraints involved and given the grey weather I think this was indeed the best option as I doubt hiking around would have been that enjoyable and scenery is only good if you can see it. Instead, I nosed around the small market for a bit and sat on the shoreline enjoying the sound of waves as I delved back into the pages of my book. 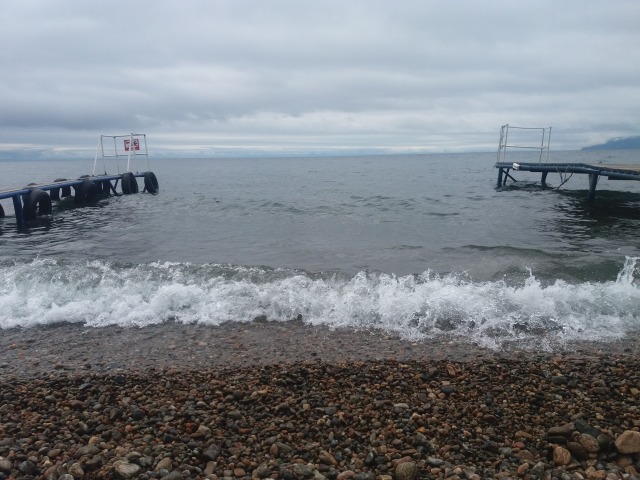 My finally day in Irkutsk was spent lazing around the hostel and buying some food for the next leg of my trip along to Kazan. I settled on porridge sachets for breakfasts, instant noodles for dinners and then some bread and cucumber with salami to make sandwiches at lunchtime.

After a few days of recovery from riding and several glorious hot showers, I set off on the next leg of my Trans Siberian adventure. The morning before I left, I stocked up on food. With less than twenty four hours of travelling, I managed to avoid instant noodles, instead opting for a loaf of bread, a cucumber and some tomatoes along with some snacks to stave off any nibbles I might catch.

Boarding the train was easy and I quickly found my bunk. In the cabin of four, I was sharing with a Korean couple and an Israeli. With the couple on the bottom bunks I mostly spoke to the Isreali who had been travelling around Mongolia and China for a few months. Needless to say, I was rather jealous of how long he had had in Mongolia. As we chatted I could hear the distinctive tones of an American and Brit drifting throughout the carriage as they chatted away to their various companions. It is amazing how certain accents carry above others.

Our border crossing was painless in that nothing went wrong but at the same time seemed to drag on forever on both sides. With the late hour (we didn’t leave the Russian side until 0145) everyone got a little grumpy and there was some screaming and crying from the aforementioned Brit although this was quickly stopped with some stern Russian words.

As always, I slept well once we set out from the border, even if it was for far too little time since we pulled into Ulan Ude around 0600 and the Isreali disembarked, sadly waking me up despite his best attempts to be quiet. I think the sun was halfway to waking me up anyway. I dozed fitfully for a little longer before giving up and staring out at what I could see of the scenery from my position on the top bunk.

We eventually pulled into Irkutsk, my first stop in Russia, and I set off towards my hostel ignoring offers of a taxi, instead choosing to walk and see a little of the city.