In a way it serves me right, I should have known better than to talk of having good weather. However I do think it a tad unfair that the bad weather has pursued me so doggedly since Xi’an. As it was, I rocked up to my two day Great Wall trip with a slight drizzle accompanying me. After everyone had arrived, a German family, two Americans and two other Brits, we loaded into the bus and set off towards a wilder section of the wall. 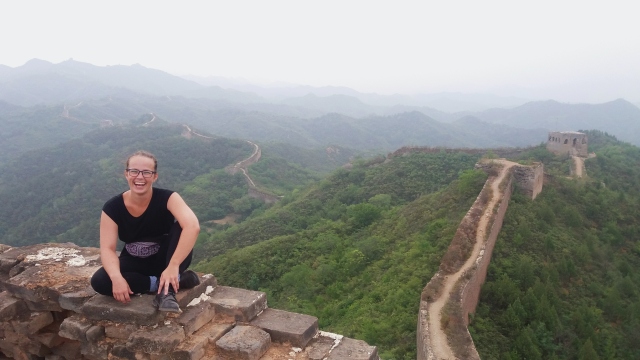 Arriving at the wall around midday, we had lunch at a farmhouse before setting off. Our guide said flat. This is not a comment I can agree with. Admittedly he did eventually add the caveat that there was an up bit at the start and a down bit at the end but even then the stretch is the middle was, to my eye, by no means flat. This isn’t really a complaint in true form as I suspect walking along a completely flat stretch of wall would get boring very quickly. With the gentleish rolling of the hills along which the wall is built it meant we had a constantly changing view of the wall as it stretched out in front and behind us.

The visibility was not amazing due to the weather but the real downside was that while for most out hike it had been only cloudy, with a storm predicted for the night, we could not camp at the wall and instead had to stay in a farmhouse. This meant that we didn’t get the chance to see a sunset or sunrise (I do acknowledge neither would have been any good with all the cloud) or do any hiking on the second day, instead eating breakfast before returning to Beijing.

As previously mentioned the view was somewhat limited by fog but this did not detract from the walk all that much as we, unlike our cameras, could still see a fair ways into the distance as watch towers slowly became nothing more than silhouettes on the horizon. This section of the wall hadn’t been rebuilt like some of the more popular sections, rather the opposite, as in the 1960’s the Chinese government encouraged farmers to take bricks from the wall to build their homes. Furthermore, our guide tells us that in world war two there was a lot of fighting in the vicinity of the wall so bombs had damaged other sections. Fortunately it was still possible to walk along the top of the wall for the entire way, although there were a few don’t look down moments.

All in all it was and enjoyable trip with the only real downside being the lack of hiking on the second day. For those interested, I went on China Hiking’s Gubeikou to Jinshanling Great Wall two day camping trip.