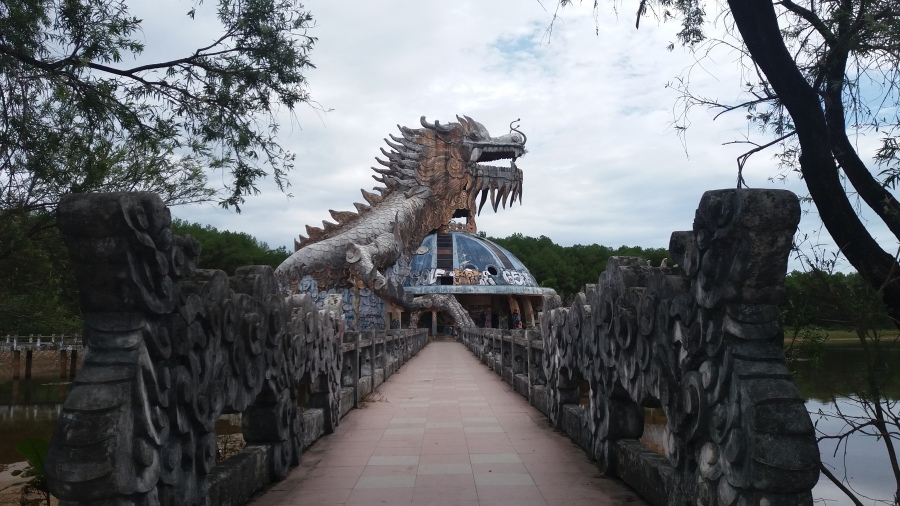 Upon deciding to head up to Hue after Hoi An, I spent a lot of time debating whether or not to do the Hai Van Pass by motorbike as everyone whose done it reports absolutely stunning scenery. This was an on going debate throughout my stay in Hoi An and it was only on the last day I decided I wasn’t confident enough to ride a motorbike or scooter the necessary 160 odd kilometres. In the end I caught a local bus to Da Nang and then got the train the rest of the way. This meant I got to see a little of the beautiful scenery but missed out on the best bits. On the other hand, I arrived at my hostel in one piece and without an Asian tattoo of gravel rash.

Cycling around Hoi An had given me the bicycle bug so the day after my arrival I rented a bicycle and set off to explore the sites around Hue. Within the city there is less to see but surrounding it are tombs and temples. I started off by powering along to the UNESCO Imperial City. Building started in 1804 but less than a century and a half later in 1947, Viet Cong and French fighting destroyed many of the buildings and burned the Imperial Palace to the ground. Then the Citadel was badly damaged in 1968 during the Tet Offensive and the South Vietnamese and American efforts to reclaim Hue. By the end of all this only ten of some 160 major buildings or sites remained. Fortunately, these have been or are in the process of being restored and preserved.

All this makes for a curious experience walking around the Citadel as some parts remain grassy ruins and others are perfectly solid (if a little weathered) buildings. While some of the weathering had clearly appeared naturally over time, there were a couple of places where it appeared intentional such as where doors had multiple layers of paint in different colours showing.

I eventually found myself at the exit and decided to move on to my next loaction: the Thien Mu Pagoda. The pagoda was magnificent but also interesting was some of its history as this was the home of Thich Quang Duc, the monk who famously self immolated in 1963 to protest the prosecution of Buddhists by the Roman Catholic government. The car he used to drive down to Saigon is on display at the pagoda and provided yet another insight into the build up to the Vietnam war.

Out of all the tombs, I decided to visit only one as the 100,000đ entrance fees to each would have quickly added up and the distant locations meant I wasn’t confident of fitting everywhere into one day. Hence, I went to the one that seemed to have the best reviews, the tomb of Emperor Tu Duc. While I cannot compare it to the other tombs I felt it deserved the reviews and enjoyed looking around the complex.

I spent the evening recovering from all my cycling over a cold beer with an Australian from my hostel and woke up bright and early the next day to finish packing.

Packing complete, I set left my backpack at the hostel and set out riding pillion on the back of a lass’s scooter to the abandoned water park. The Australian from the night before was with us and my excellent navigation skills saw us arriving in no time. We ended up paying the  fee to the security guard to enter the park as the large group of girls we were standing with all caved and our sheep-like natures won out.

The water park didn’t have tons to see but the huge dragon in the centre of the lake was really cool to climb up and look out from. A few small additions to the graffiti later and we came across some flumes and slides that had seen better days. Finishing our loop around the lake, we headed back into Hue for a rushed lunch before I caught my bus up to Phong Nha.