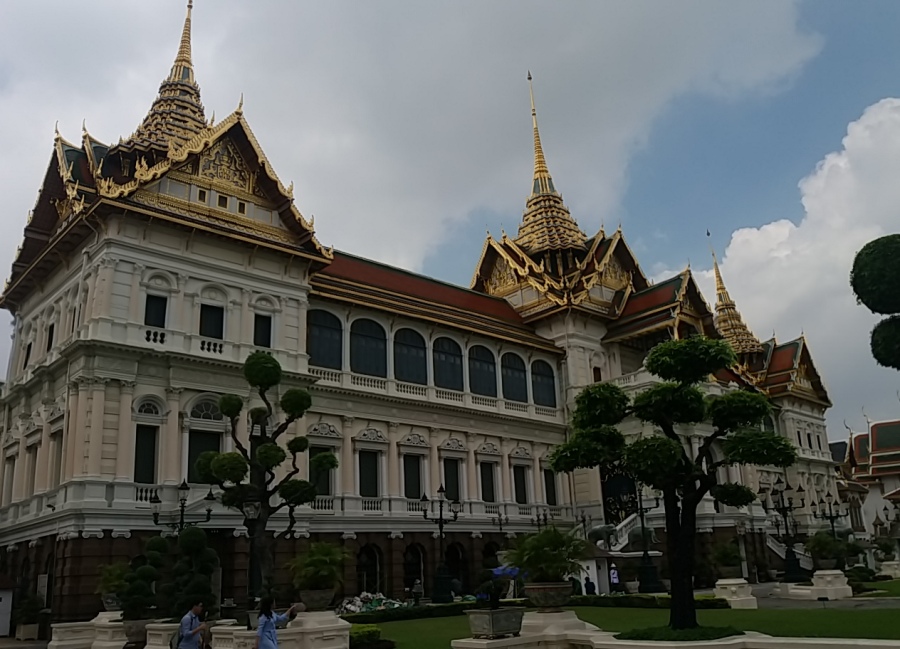 On the surface Bangkok does not offer much. There is a multitude of Wats and a fair number of museums but otherwise the standing agreement among backpackers is two or three days in Bangkok and then move on, maybe stretch it to five days. To an extent I agree, within the easily accessible parts of the city, there is little to do after the Wats have become a golden blur, each photo potentially belonging to a dozen different locations. However, Bangkok makes an excellent base of operations for visiting a number of other locations. In my case, I visited the Bridge on the River Kwai and Ayutthaya, which I talk about in two separate posts.

Upon dumping all my belongings at the hostel, I quickly left to fit in the famous solid gold Buddha at Wat Traimit. I bought my ticket and waited patiently to take my photos after climbing to the top. This took a while because the moment certain other tourists saw the spot directly in front of the Buddha was free, they were charging in and having a full blown photo shoot. The irony that they complained the moment I put a toe in their photos after they had just set up shop in mine was not lost on me. I was strongly reminded of the Chinese tour group I had encountered when taking photos of street art in George Town. Unfortunately, this is a part of being a tourist and when I find myself feeling frustrated, I take a breath, remind myself I am British and therefore that I know how to queue.

Something I was not aware of, and which wasn’t at all clear at the ticket booth, was that a different ticket to the small museum about the Golden Buddha on the floor below was needed. Hence, I decided to give the museum a miss since I knew the basic story of how the Buddha had been “discovered” when it was dropped while being moved and the plaster covering the gold cracked and fell away. Still tired from my train journey up to Bangkok, I called it a day and returned to the hostel for an early night via Chinatown and picking up some pad thai from a street vendor on the way.

The morning of day two in Bangkok found me visiting the Reclining Buddha at Wat Pho and the Grand Palace Complex with a guy from my hostel. Wat Pho was one of my two favourite wats. Whether because the design eased up on the gold paint or because it was the first wat I saw that day is hard to say for sure. Replacing all the gold were thousands of pieces of pottery, carefully arranged in intricate patterns. I was reminded of the Little Chapel back home, even if the pottery tiles here were each made specifically for the wat rather than random pottery shards slapped on at (mostly) random. The reclining Buddha was outstandingly huge. I particularly liked its lacquer and mother of pearl feet. Another winning feature of Wat Pho was that there was a reasonably large amount of it to see, unlike some wats where one feels that they enter, take a couple of photos, and then leave.

Despite plenty of offers, we declined a tuk tuk for the five minute walk to the entrance of the Grand Palace and Wat Phra Kaew. Getting in presented more of a challenge than we expected. First the guy I was travelling had shorts which were too short. Fair enough, they only just brushed his knees. So back across the road we went to pick up a pair of the colourful trousers, ubiquitous to backpacking tourists in South East Asia. I was wearing a top which covered my shoulders and had a T-shirt collar. However, it only had very short sleeves so I had covered my arms the rest of the way with a shawl. This had never presented an issue before and neither has it since. Apparently this time it wasn’t acceptable though, even as I watched half a dozen other female tourists walk pass with their shoulders barely hidden beneath flimsy scarves. Five minutes later and some quick improvisation on my part to adapt my shawl into a pair of sleeves, we re-entered the complex, me blending into a group of Chinese tourists who never seem to get stopped. With my height, an umbrella to block the sun, and big sunglasses this was not too difficult and we quickly made it to the ticket office, both sweltering from the crush of bodies and the sun.

Wat Phra Kaew was undeniably impressive with most surfaces glittering gold and it was cool to see the Emerald Buddha but the heat was almost unbearable and we found ourselves taking “shelter” in the shade as often as possible. Personally, the sheer volume of people was beginning to border on overwhelming as at five foot one (two on a good day) it was impossible to see further than the back or head in front of me and I was at risk of getting carried along by the tide. Making it through to the palace was less crowded but beyond looking at the exterior, we couldn’t see anywhere to enter so went to eat some ice cream before parting ways.

I caught the orange flag boat over the river to look around Wat Arun and Santa Cruz Church. Wat Arun had also avoided the gold craze and I enjoyed craning my head back to try and see the top as it reached towrds the sky. Even including the nearby ordination hall, there was not much to see but I think it is still worth a visit as it is very different to a lot of the other wats I visited. Santa Cruz Church was closed, I presume as it was a Sunday, but the outside of the building was nice and I had a lovely little amble from Wat Arun to the church and then on to the boat station.

From there I made way to the Golden Mount, pausing at a few wats I passed on the way. This was my second favourite wat. Not for its towering gold stupa but for the wonderful views of Bangkok that it offered in all directions. After descending the awkwardly shallow stairs, I realised I couldn’t stand the thought of another wat so walked past Democracy Monument and explored Khao San Road, collecting some mango sticky rice for a very belated lunch. Dinner was with another guest from the hostel and then bed.

I spent the next day and a half visiting the Bridge on the River Kwai and Hellfire Pass, detailed here. Upon my return I had hoped to visit the Medical Museum however it was closed on Tuesdays and I ended up not going at all. Instead, I spent the afternoon getting a Thai massage (very relaxing) and a henna tattoo (a bit of fun).

Wednesday’s visit to Ayutthaya is also described in a separate post, here, but suffice to say it was a good visit even if it left me so exhausted by the time I got back to Bangkok that I slept half the next day away. To account for this, I only visited one place, the Queen Sirikit Museum of Textiles. Entrance to here was included in my ticket to the Grand Palace from a few days before so it made sense to visit. The museum isn’t huge, with one section detailing the long and peaceful relationship between Thailand and the US, showcasing some of the gifts exchanged between the two countries over the years. The second section appealed to my inner seamstress and was a variety of restored pieces from Queen Sirikit’s wardrobe, the majority from her visits to the US and Europe in the 1960s.

My final day in Bangkok was spent taking a breather and resting up for my 0100 night bus to Siem Reap where I then transferred down to Phnom Pehn.