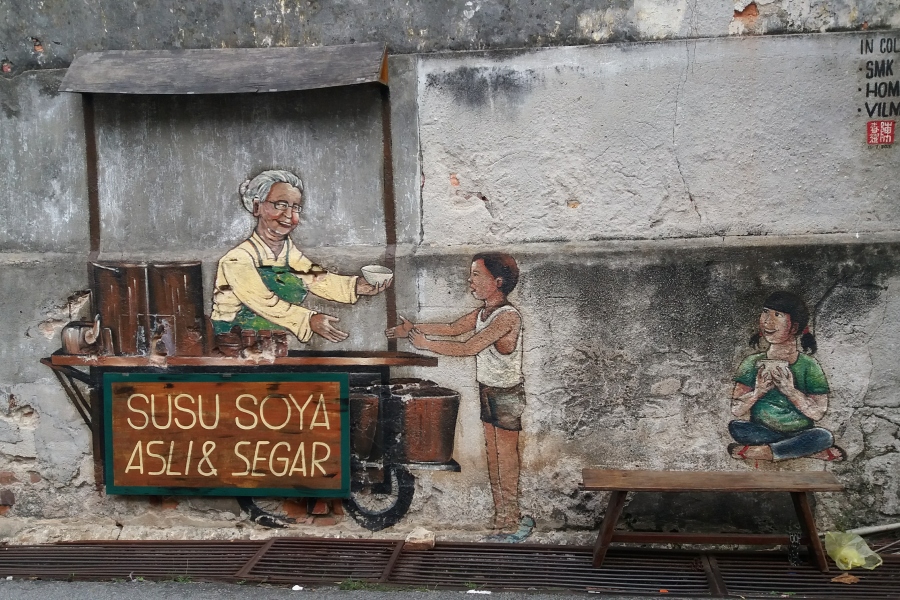 The traditional tourist tactic of heading from A to B with blinkers on is not an acceptable way to visit George Town. It is a town made to been meandered through aimlessly, drinking in the historical architecture and gorging on a delightful fusion of cuisines. With a whipstop a day and a half stay, the amount of food to be indulged in was somewhat limited but my artistic spirit feasted continuously throughout my time in Penang.

The architecture, the street art, the colourful signs, and aesthetic hipster cafes, there was always something to look at and admire. Utilising a map from the tourist information centre I quested out the most well known pieces of street art, keeping my eyes peeled for the amusing wrought iron “Marking George Town” cartoon pieces. This gentle rambling around eventually saw me devouring a plate of one of the local dishes, char koey teow, a kind of flat rice noodle with eggs, bean sprouts and prawns. With limited table space, I ended up sitting with another English traveller and chatting about out experiences of travelling solo.

The next day I ventured down to Fort Cornwallis and nosed around for about half an hour. Aside from a decent view of the Straights of Melaka, there was very little to see within the fort. There are a few cannons, the outer wall, and the old gunpowder storeroom but very little in the way of plaques explaining and expanding upon the historyof the site.

With an awkward amount of time before the tourist office’s free walking tour, I tested out one of the hipster coffee shops nearby, sipping a black coffee as I read my book.

The short walking tour was a little hard to hear at times but what I could hear was very interesting and had I had more time, I would have liked to visit a couple of the place we looked at in more detail such as the Pinang Peranakan Mansion, a house turned museum on Church Street that used to be used by a Chinese secret society, the Ghee Hin.

The Englishwoman I had met the previous night was also on the walking tour so we joined forces afterwards to amble through Georgetown, picking roads at random. We eventually found ourselves sampling some blissful eggtarts at Ming Xiang Tai. There was a brief moment of internal panic when I misread the sign as RM20 per tart but upon rereading the signs it was only RM2.20, so a slight difference there.

After that it was more wandering before we eventually called it a day and went our separate ways.