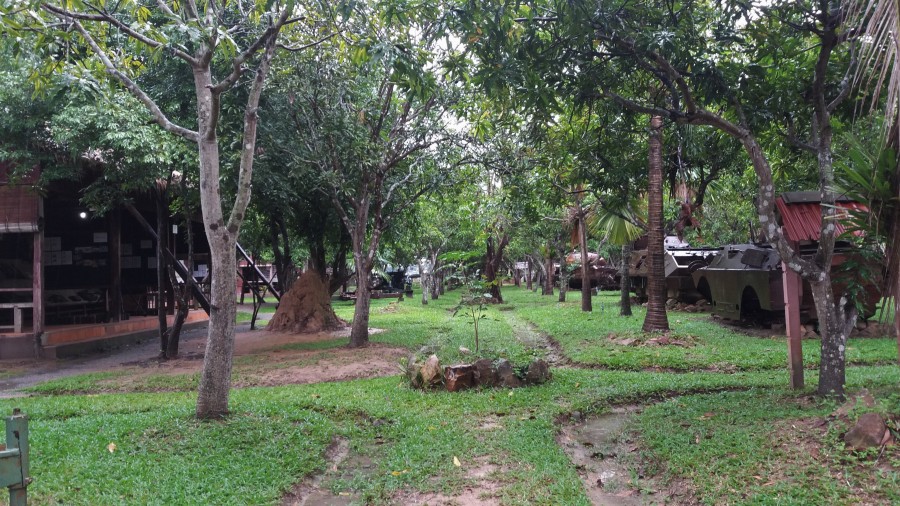 After just over an hour of queuing, filling in forms and queuing to fill in forms, I make it land side in Siem Reap, Cambodia.  With no luggage to collect, I head outside and hire a tuk tuk to take me to my hostel.  Speeding madly along, I make multiple grabs for the convenient roof handle so as not to be launched headfirst from the tuk tuk into the sea of motorbikes, half of which are pulling trailers loaded with varyious goods and people.  Despite this, I can’t help grinning in exhilaration as the wind whips my face.  My grin becomes particularly Cheshire every time we overtake another tourist laden tuk tuk.

We make it to the hostel in one piece, and I arrange to be picked up at 4 o’clock to see Angkor Wat at sunset and to have my driver, Mr Bunna, for the next two days.  Price agreed on, I check into the hostel and try to decide what to do until 4 o’clock.  While I was planning, I spoke to a few people about what to do and asked if anyone wanted to join me on my temple adventures.  Unfortunately, everyone had either already booked on to a tour or had other plans so as the skies opened, I set out to the Angkor National Museum to escape the rain. 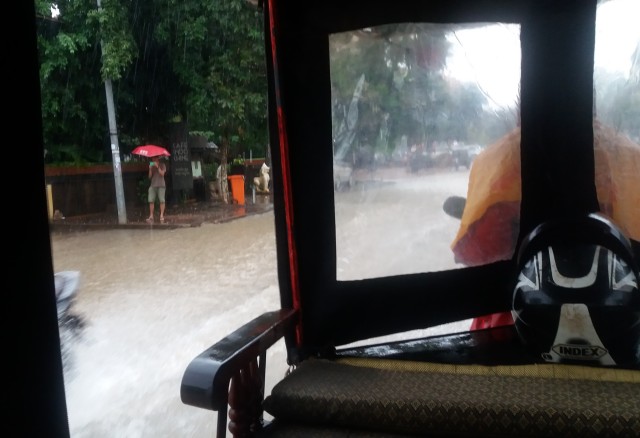 The roads had magically turned into rivers, with a good four or five inches of water covering them in some places.  I was mercifully shielded from the rain by the rain covers which rolled down all around the tuk tuk.  The ticket to the museum was US$12 which I felt was a little steep, but that may be the student in me talking.  Nonetheless it proved to be extremely interesting reading about the history of Angkor Wat, the main focus of the museum.  I certainly learnt enough facts to appears vaguely knowledgeable later that day.  I was particularly impressed with the detailed 3D model on the temple.

Something I feel it is important to note if one intends to travel to Siem Reap and see the Angkor Temples is that the Angkor Archaeological Park ticketing and Angkor National Museum are privately owned and it is unclear how much of the profits are fed back into the Cambodian economy or spent on restoring and preserving the temples.  I did find one article suggesting that the government now controls the ticketing but even so most restoration money comes from foreign aid.  While, this isn’t a reason not to visit, it is important to be aware of such things.  Personally, I elected to stay at the Mad Monkey Hostel which has a number of programs that help locals.

From the National Museum, I headed to the War Museum.  This has a wide range of old guns and tanks from the Vietnam war and Cambodian Civil War as well as information about some of the atrocities which were committed during them.  It was possible to hire a guide for free, all of whom were either war veterans, eye witnesses of the war or landmine victims.  The museum presented an insight into the last thirty years of the 20th century for Cambodia and I was once again left wishing that schools taught history outside of their country’s influence because how could we not be taught about this? Museums like this are a part of the reason that travelling can reduce and eradicate prejudice, because knowing history helps us to learn from it.

Feeling a little small, I headed back to the hostel and persuaded the driver that no, I did not need a tuk tuk tomorrow.  With that I began to plot how to corral someone into joining my temple tour and so divide the cost of the driver.  I was also determined to make some temporary holiday friends since one of my study year abroad goals is to learn to overcome my introverted nature and meet new people.  Fortunately for me, at that moment a group of unsuspecting students arrived and I was able to help them avoid the “stress and trauma” of planning by inviting them to see the temples with me.

3 thoughts on “Arriving in Siem Reap”