I only went for the lights but was quickly drawn into the festival itself. The lights are a lure you see, they tempt you down to the museum and then, since you’re there, why not peruse what else the festival had to offer?

The light show projected onto the outside of the National Museum was short but intriguing. Another story for the mind to tell. Whereas, the light show at Marina Bay told the full emotive story, this time a prompt, a mere whisper of an idea was seeded in the watchers’ brains allowing us to continue and conclude to story as we wished. Here, we delved into the Sci-Fi genre. The geometric lines that define each feature of the building begin to warp and twist as reality changes. The façade shatters, the shards blown around by an invisible wind before they settle into a new shape and a stone lion peers out from the wall. 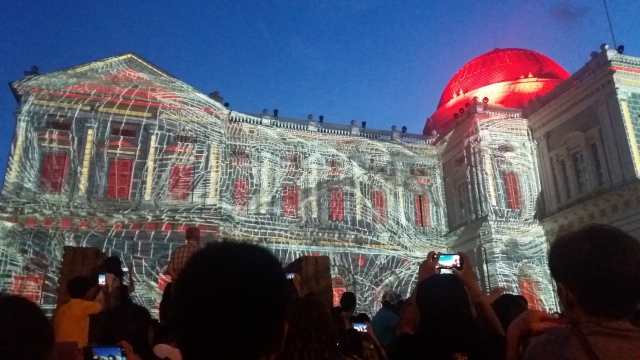 Suddenly, the world glitches. Strips of white static followed by the whine of a feedback loop and colour bars signalling a hack. Points of light fly across building’s surface, warping the image as they move. We know now that we are not the only reality and that all realities are nothing more than a computer program, a network of ones and zeros, susceptible to both glitch and hack. But what is this? As successive realities shatter and warp out of existence, how do we know if this if glitch or hack? Will the program reboot? Or is this the end? This is the question left to the watcher, the opportunity to dive to the depths of imagination and explore the world through another’s eyes. 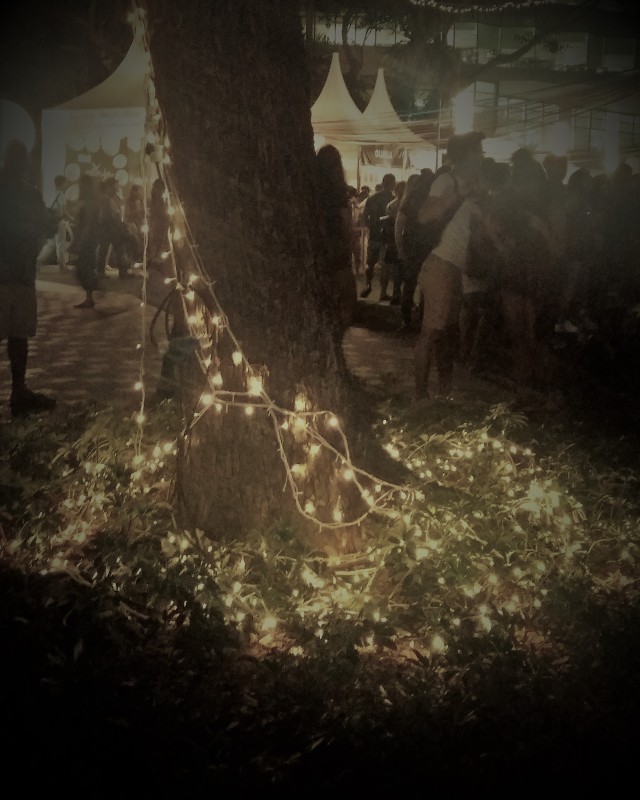 From Sci-Fi to fantasy, with the end of the show I dive into the world of the night festival. For a fantastical moment, I see the festival trough my mind’s eye, not as the modern day world of electricity and AstroTurf, but as a faire in a foreign land, filled with enchantments and magic. Here the grass underfoot is transformed from plastic to thick turf, spongy and spelled to not become mud under the tread of a thousand people. Fairy lights strung between trees become beads of magic, dancing through the air and bathing the world in their soft glow. Drinks that flash with the piercing blue of LEDs, are painted as exotic and exciting elixirs, promising all the fun of ale without the lingering headache. Only the white peaked food tents remain untouched, they already fill the night air with a heady array of smells and flavours. Perhaps if I was closer and could see inside, I would see wisps of magic as food is cooked over open flames and tossed on to waiting plates.

As I wander through the night, strains of music call to me. Whispering in my ear to watch this show for just a little while. To relax in the lawn hammocks and let the music roll over me as I soak in the lively atmosphere and sounds of laughter and joy. While it may be odd for a physics student to wonder around with magic in her eyes, it is hard to resist when an extra layer of life adds a whole new world to this program of reality.

One thought on “The Night Festival”